Hypercalcemia  (Hypercalcemia) is a condition that indicates an elevated calcium (Ca2+) level in the blood. It may be presented as acute, chronic, or transitional dysfunction.

With mild hypercalcemia below 12mg/dL, many individuals stay virtually asymptomatic, although the symptoms thought to be always present in mild form, such as elevated thirst, anxiety, sleep problems and fatigue. Hypercalcemia can occur due to abnormally high skeletal calcium release mediated by parathyroid hormone release, increased intestinal calcium absorption, or decreased renal efficiency of calcium excretion.

The neuromuscular side effects of hypercalcemia are caused by a negative bathmotropic effect resulting from increased interaction of calcium with sodium channels. This raises the threshold for depolarization because calcium blocks sodium channels and inhibits depolarization of muscle and nerve fibers. This appears contributes to chronic painful syndromes development such as Myofascial pain syndrome and fibromyalgia. 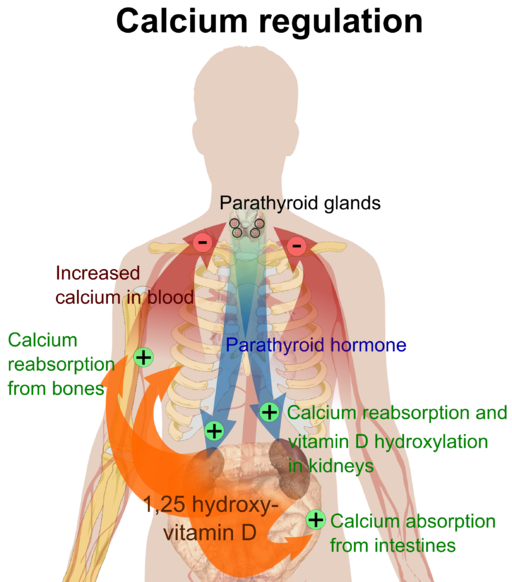 When PTH is high and calcium is normal or high

Parathyroid hormone (PTH) values should be interpreted together with serum calcium and phosphorus levels, and the clinical presentation and history of an individual.

About 90% of the individuals with primary hyperparathyroidism have elevated PTH levels. The rest, have normal (inappropriate for the elevated calcium level) PTH levels. About 40% of individuals with primary hyperparathyroidism have serum phosphorus levels <2.5 mg/dL and about 80% have serum phosphorus <3.0 mg/dL.

The following table may be helpful in interpreting laboratory results:

The goal is to first reduce the blood concentration of calcium and treat the underlying cause immediately after.

In case of hyperparathyroidism, abnormal parathyroid gland(s) are advised to be removed for long term benefits.